A Life of Public Service…A Vision for the Future 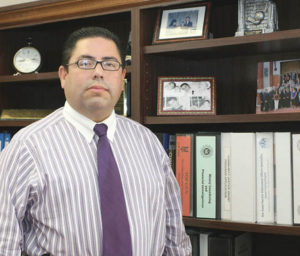 P.R.A.C. of Southern N.J. is led by a nationally recognized Hispanic leader who has a lengthy resume dedicated to public service, community and Hispanic initiatives. His resume includes a twenty five year law enforcement and criminal justice career.

During this time he held a multitude of supervisory and management positions and on January 5, 2005 was the first Hispanic in the history of New Jersey to be appointed Chief of a County Prosecutor’s Office.

After retirement he become the President of The Padilla Group LLC a consulting firm specializing in media, marketing, translation services and risk management, safety and security consultation for governmental and corporate clients.

A dynamic visionary leader who speaks throughout the nation on topics ranging from Hispanic Empowerment Initiatives, Cultural Diversity and Police Accountability practices he has brought a clear and precise plan to P.R.A.C. to further its commitment to the community.

At P.R.A.C. he has created a vibrant housing program to improve the quality of life of families from throughout the area along with creating a Hispanic Cultural, Heritage, Arts, Entertainment and Sporting Initiative component which has made PRAC the leader in the region for events such as these.

He is the son of Rosa Padilla from Villaba, Puerto Rico and the late Rafael Padilla from Jayuya, Puerto Rico. He currently resides in Pittsgrove Township with his wife Elba of nearly thirty years. He is the proud father of Ryan Padilla, Rutgers University-New Brunswick graduate, Ray, Rowan University graduate and Gabriella a ninth grade student at Arthur P. Schalick High School.

Favorite quote: “There are those that look at things the way they are, and ask why? I dream of things that never were, and ask why not?”-Robert F. Kennedy